French designer Julien Fournié is the dark knight who lights up the night. The extravagant show was held in the L’Église Reformée de l’Oratoire du Louvre. The story of this wonderful place goes back to the time of French king Henry IV. The Huguenots (French Protestants) were persecuted in the early modern age for a long time. In the end, Henry issued the edict of Nantes, which allowed the Protestants to freely practice their religion and build their own church. This sacred place is not only for praying. Many well-known and acknowledged designers, for example Alber Elbaz, Jean-Charles de Castelbajac or Damir Doma have held shows in the church. Not at all by chance. We were overwhelmed by the size and mysterious charm of the place as soon as we stepped in. Everyone took their seats, suddenly there was darkness and the show began at last!
Julien Fournié’s autumn/winter collection was dominated by the colour black. He brought the almost demonic clothes closer to the audience by applying enormous ornaments, tiny Swarovski crystals, sparkling sequins and transparent lace. 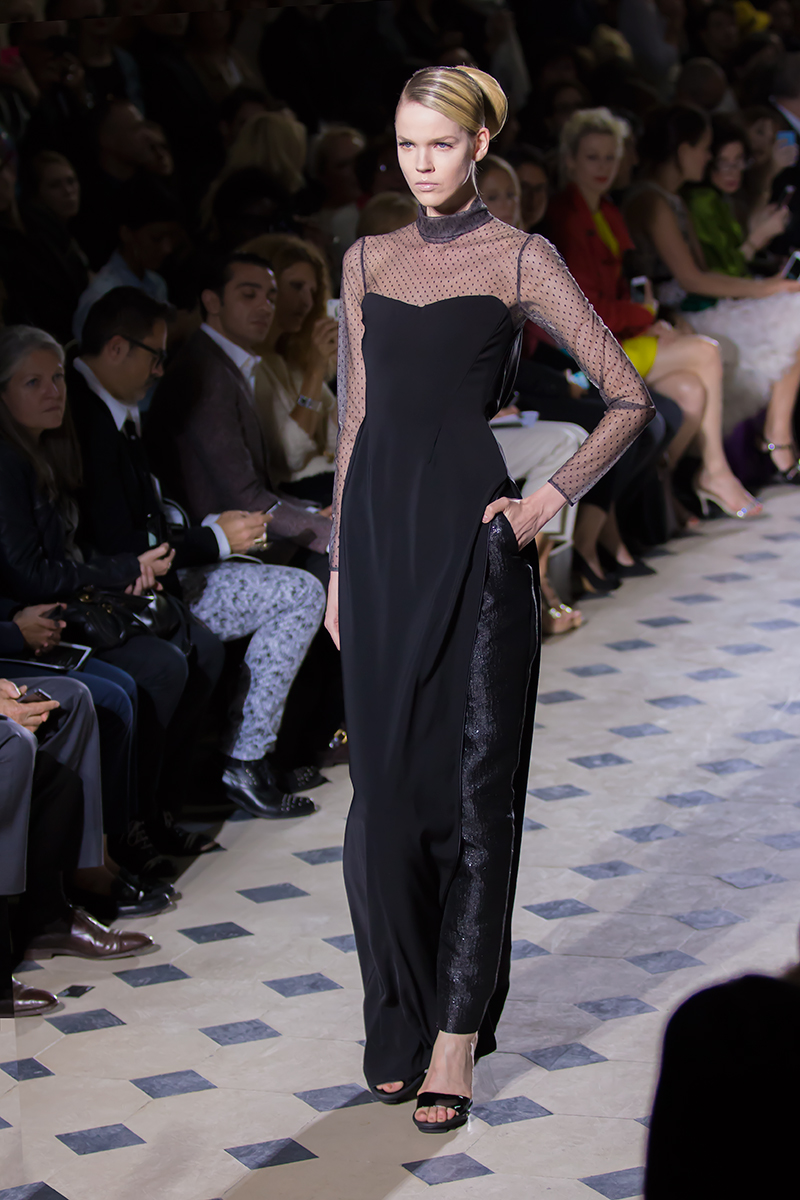 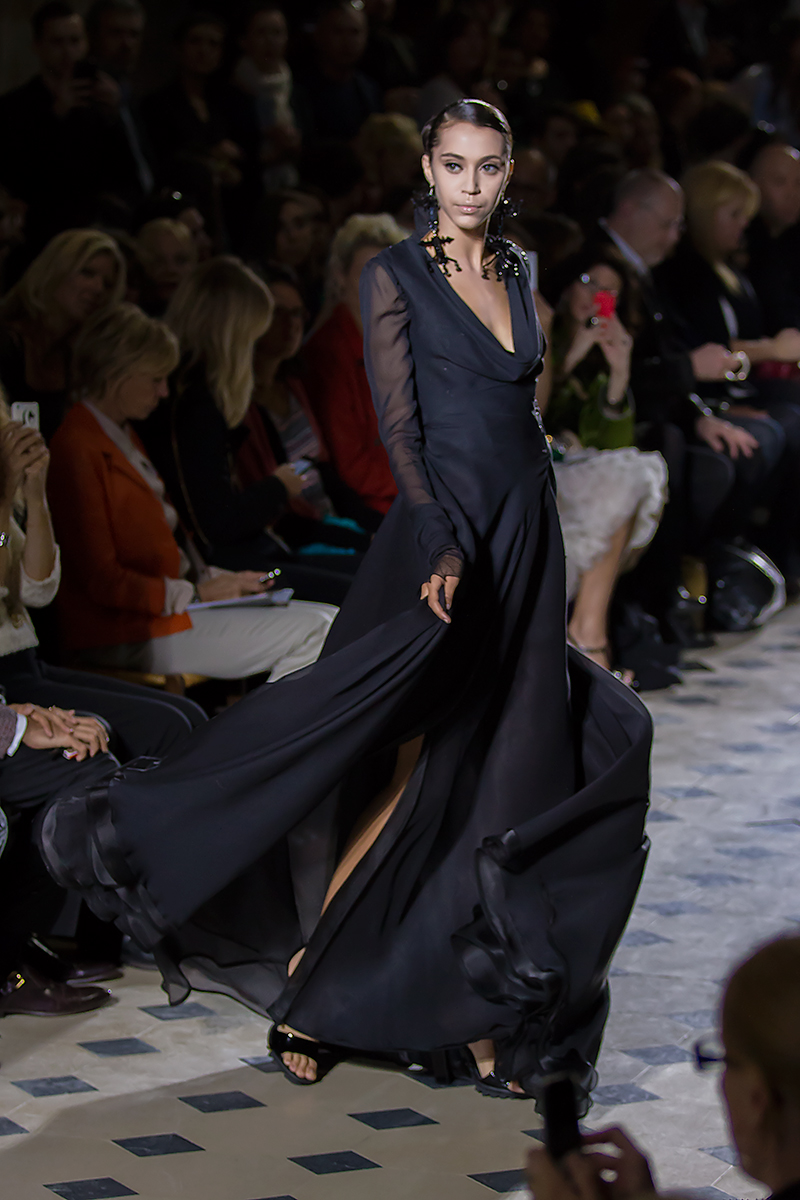 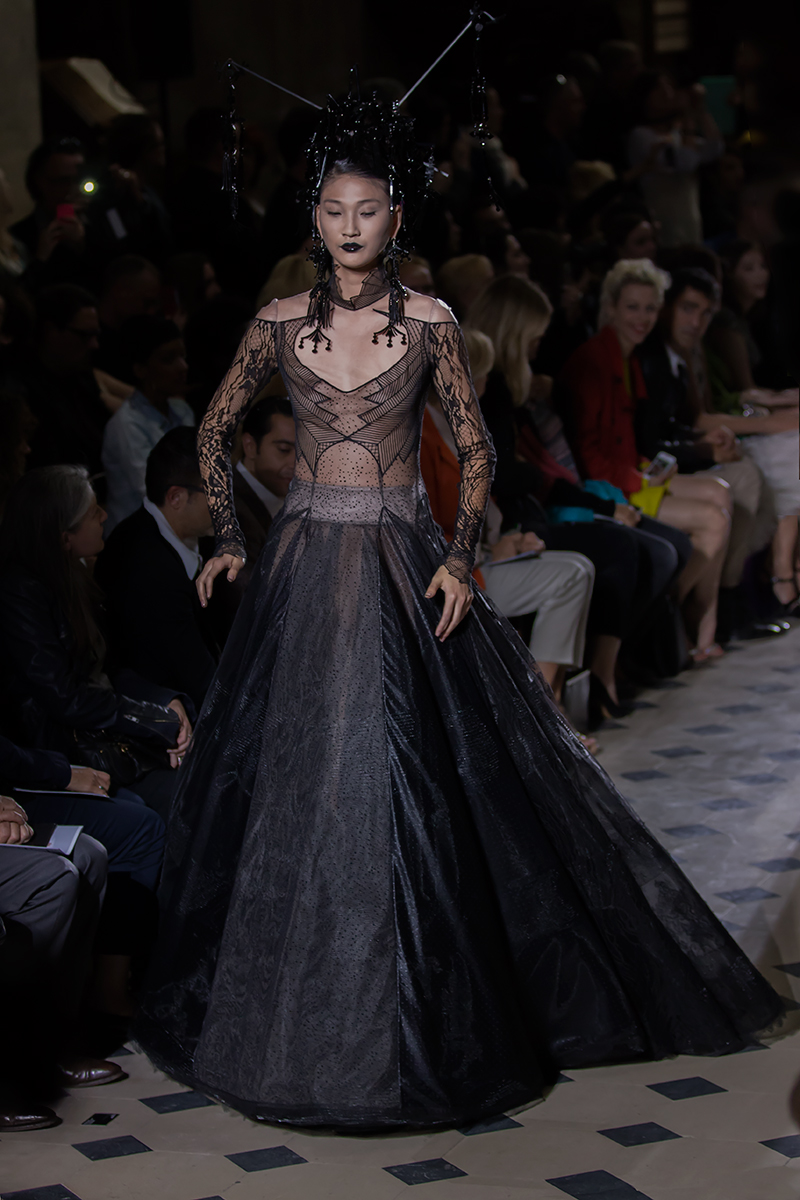 The designer also gave some thought to the people who like wearing colourful clothes in the winter, too. Fuchsia, yellow and green had a refreshing effect on the whole collection. 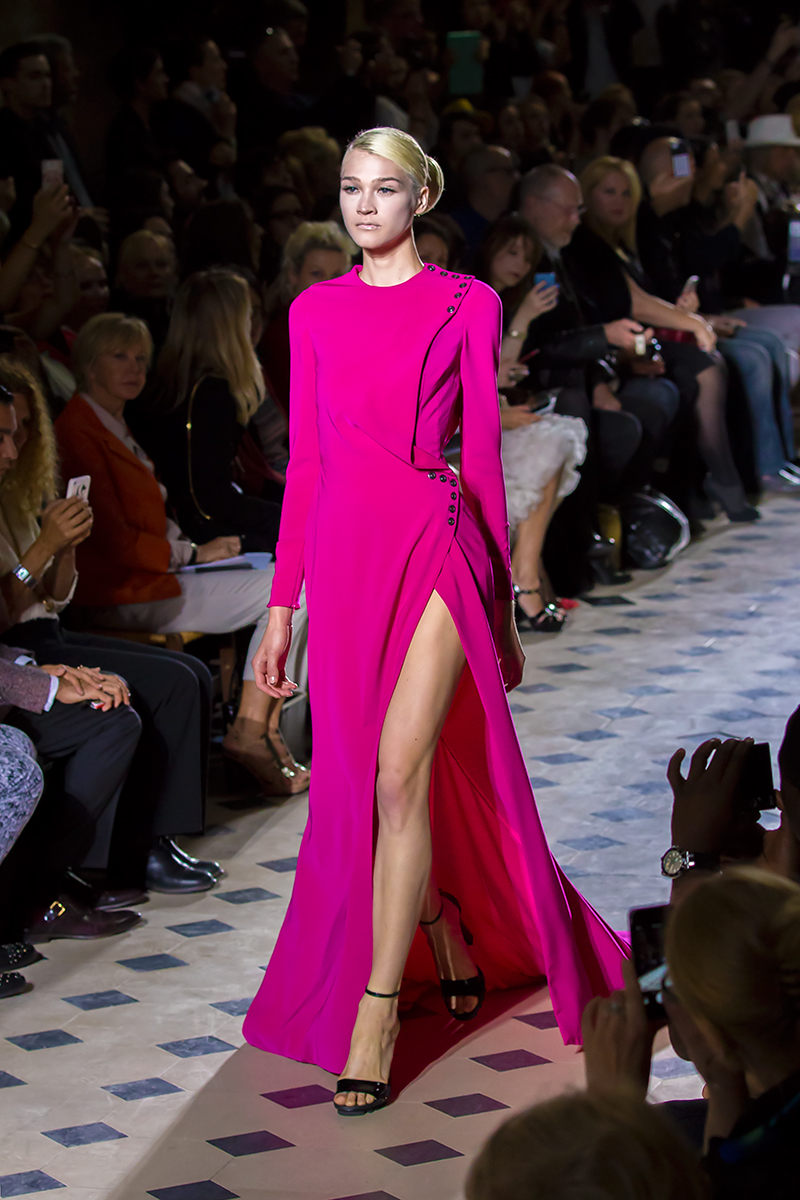 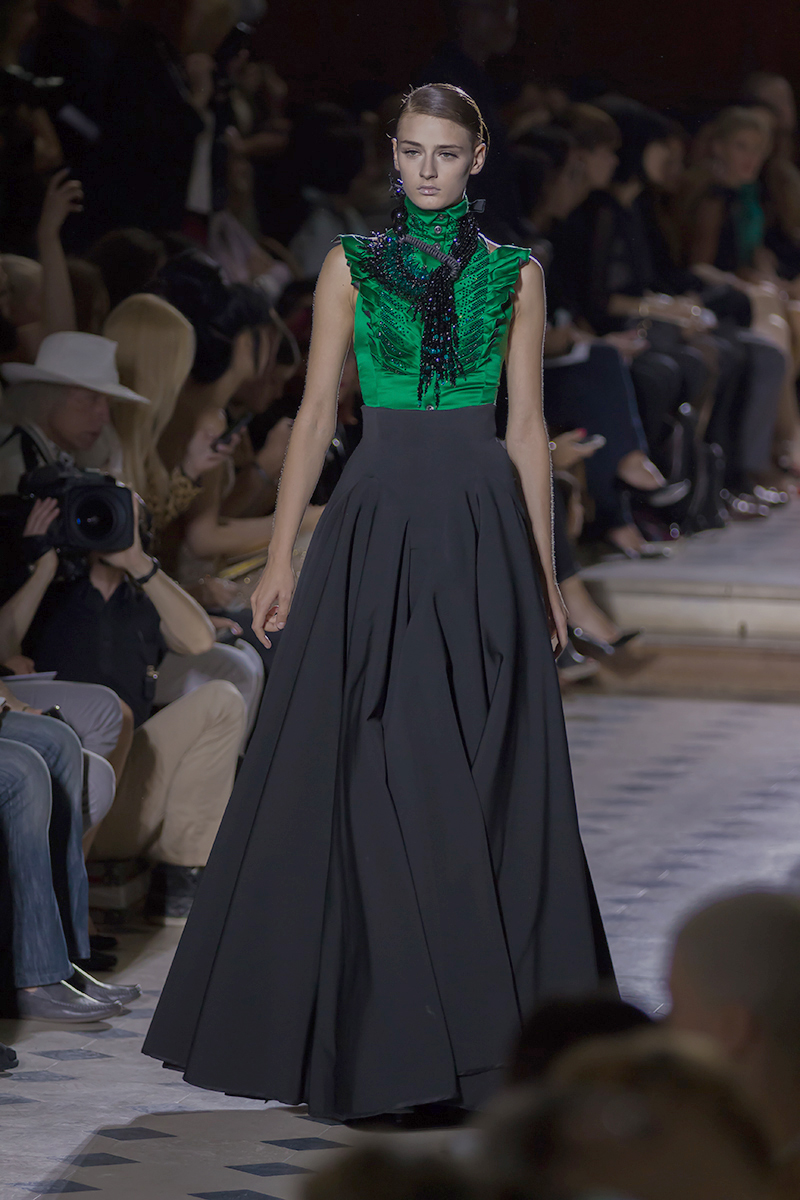 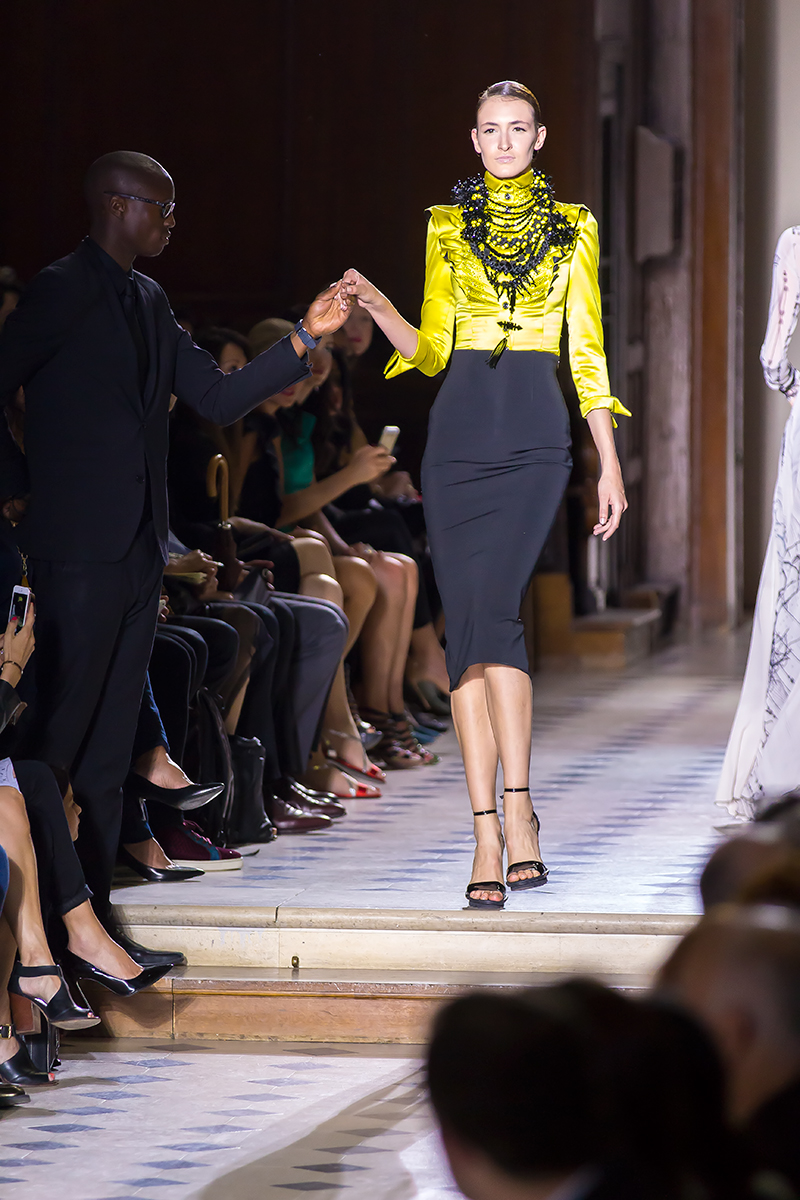 Shiny taffeta, secretive lace and silk made the whole picture perfect. Apart from the simple, manly pencil skirts, we were also able to admire feminine, low-cut, light and fluttering dresses. 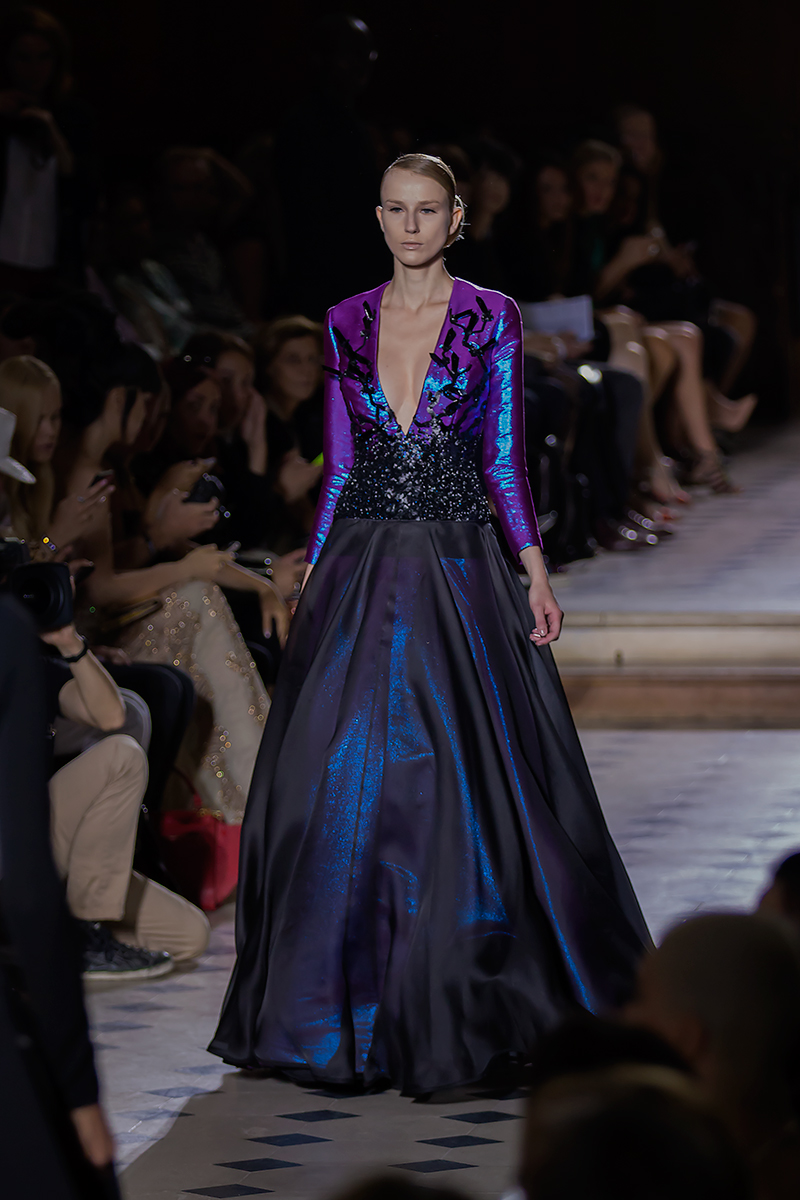 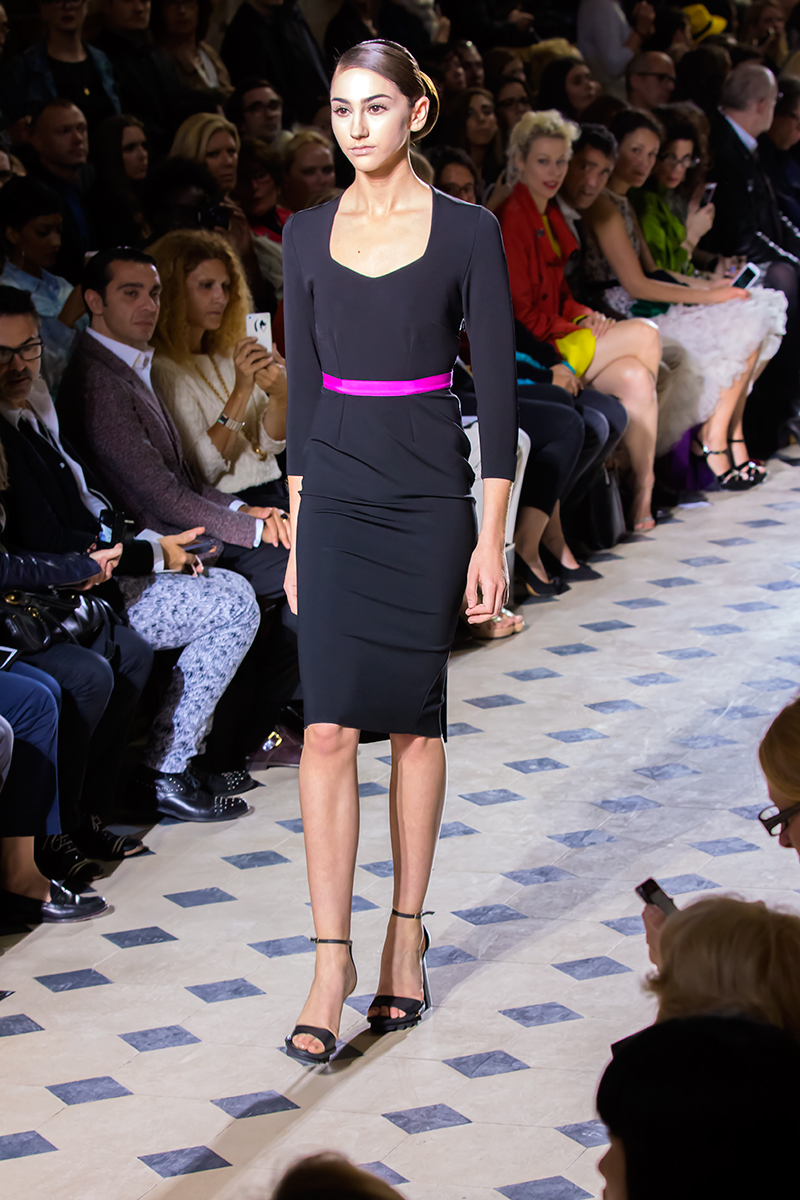 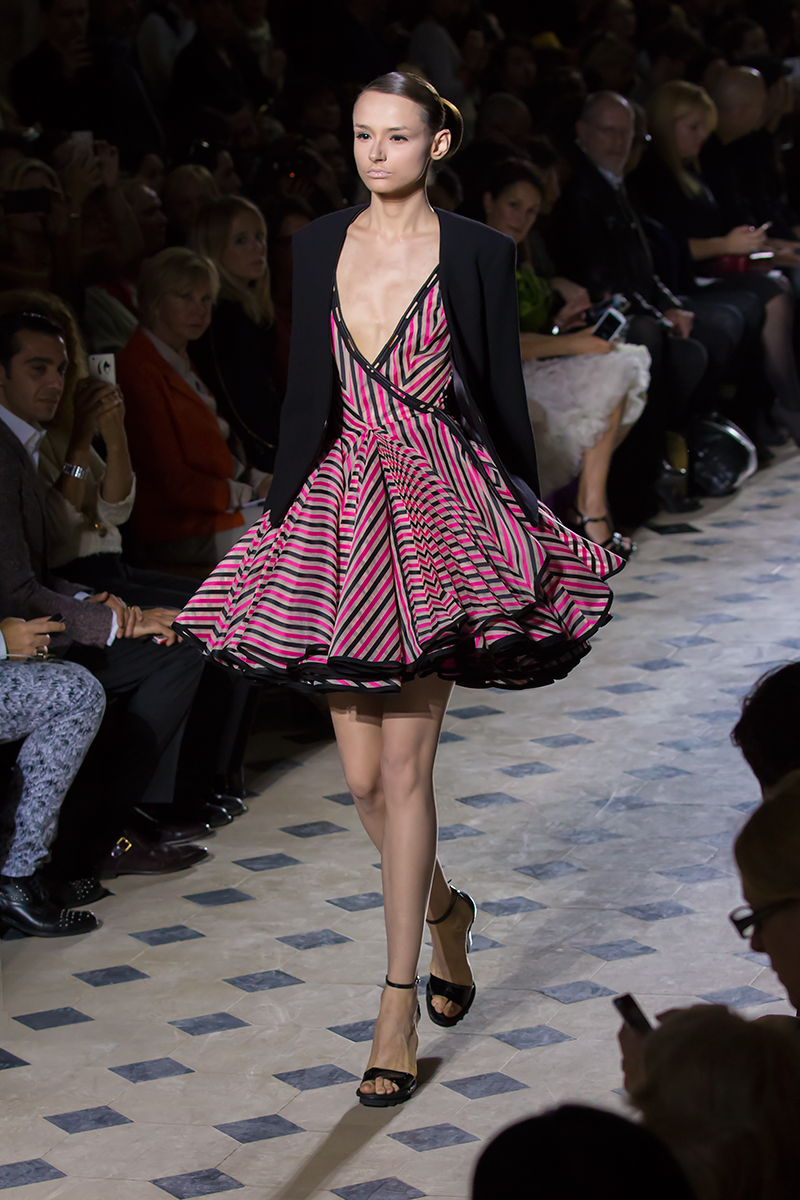 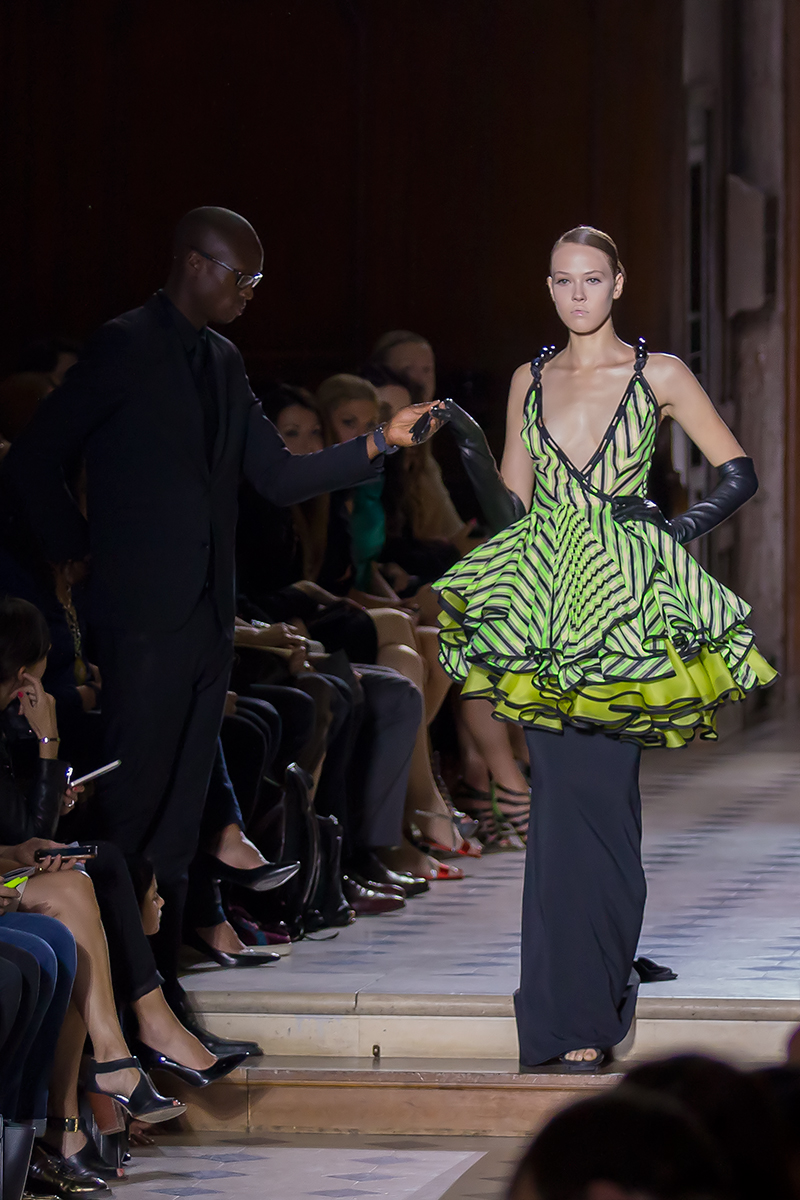 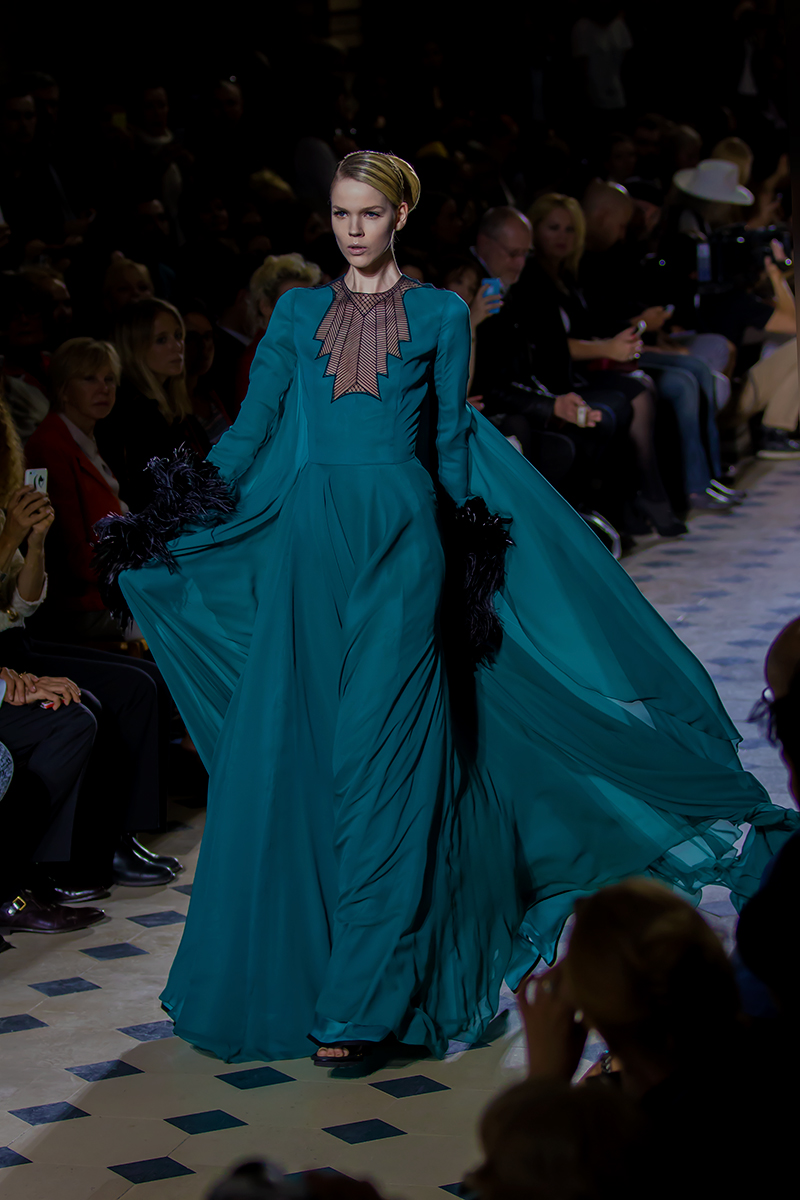 Not only the designer’s hard work made the show a resounding success, but also the sometimes soft, sometimes powerful music, which was perfectly suited to the atmosphere of the church. I got goose bumps when the music started, because the song was Meeting Laura, one of the songs from the movie made from my favourite German novel, “Perfume, the Story of a Murderer”. The song was sung by the famous Israeli Chen Reiss, accompanied by the Berlin Philharmonics.

Chen’s grandparents on her father’s side originated from Hungary, and her most famous performance is Gilda in Giuseppe Verdi’s Rigoletto.
The brilliant beginning was followed by the sounds of thunder. The models were walking to the tempo of the music. At first they were slow, then, as the show and the music got nearer to the culmination point, they walked faster and faster. The models all had natural make-up and round buns. 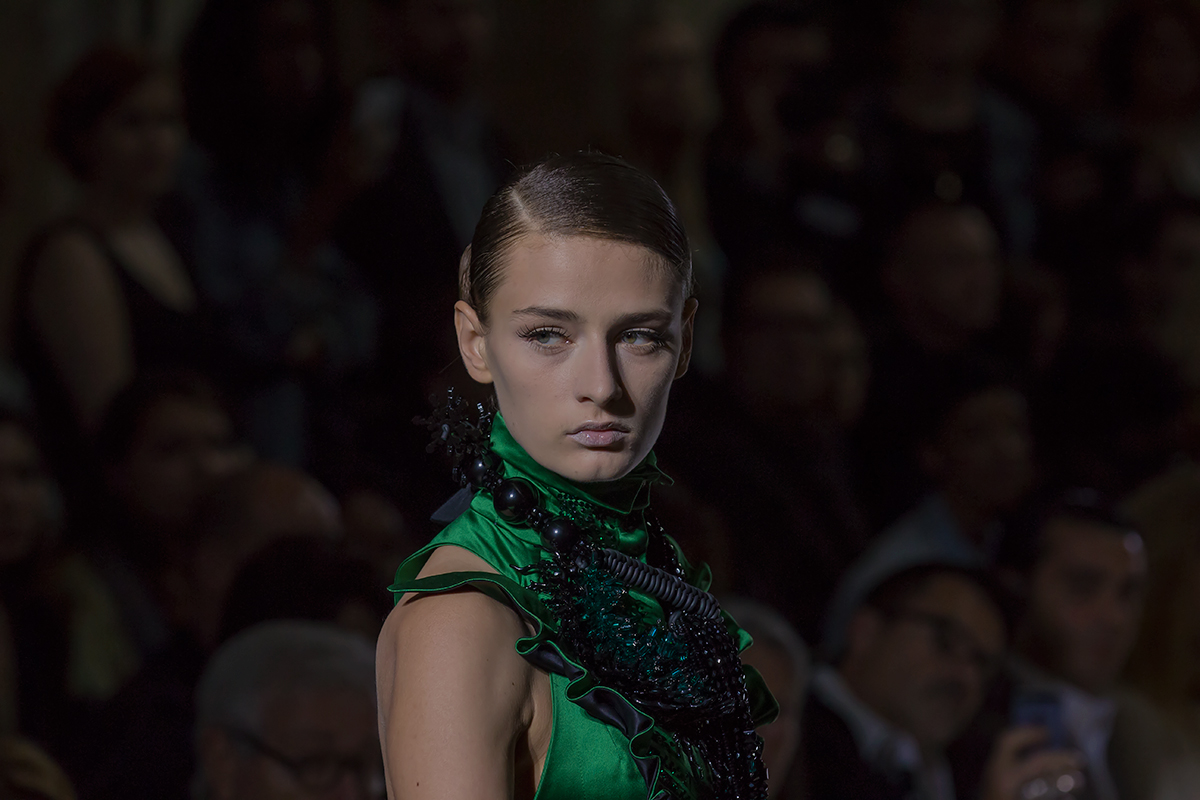 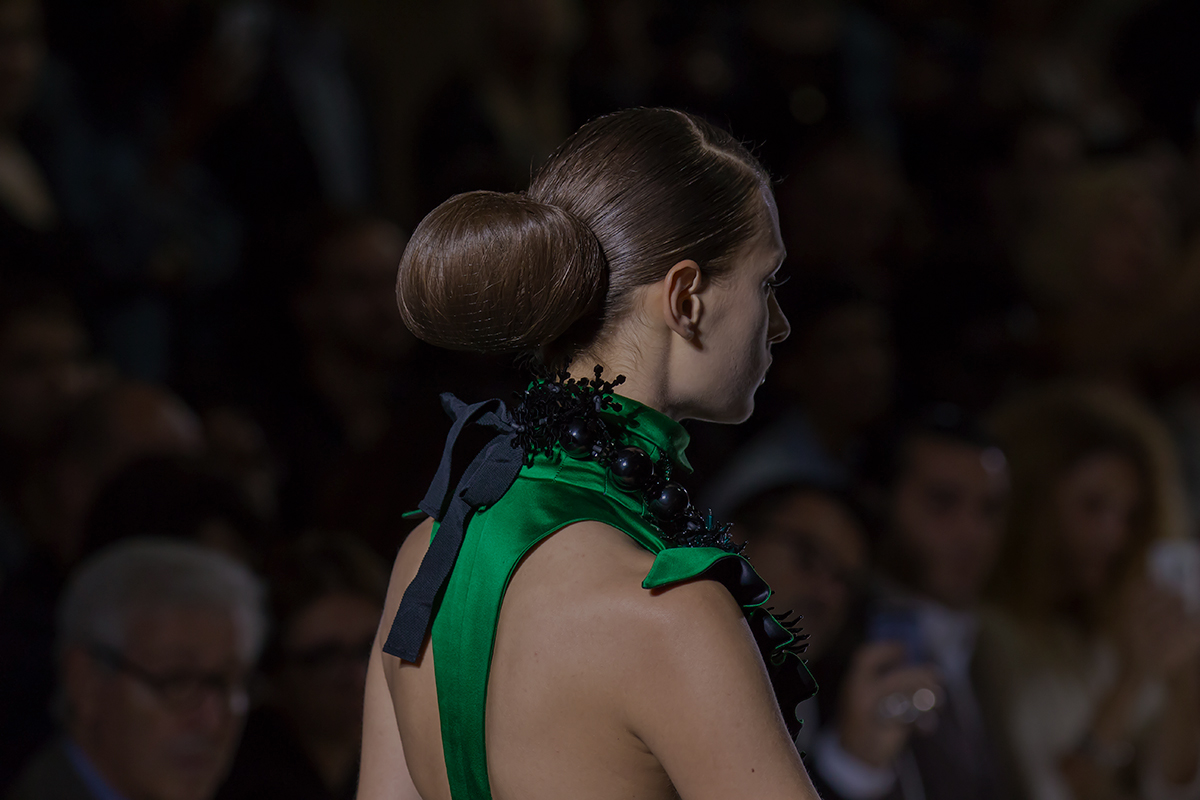 Hofit Golan, Fashion TV presenter was sitting in the honourable first row. I only realized later that the PR company’s owner and director was sitting right behind me.  The party was held later the same night in downtown Paris, in a club that seemed like a large flat. The designer was also there; he was very friendly and welcoming. 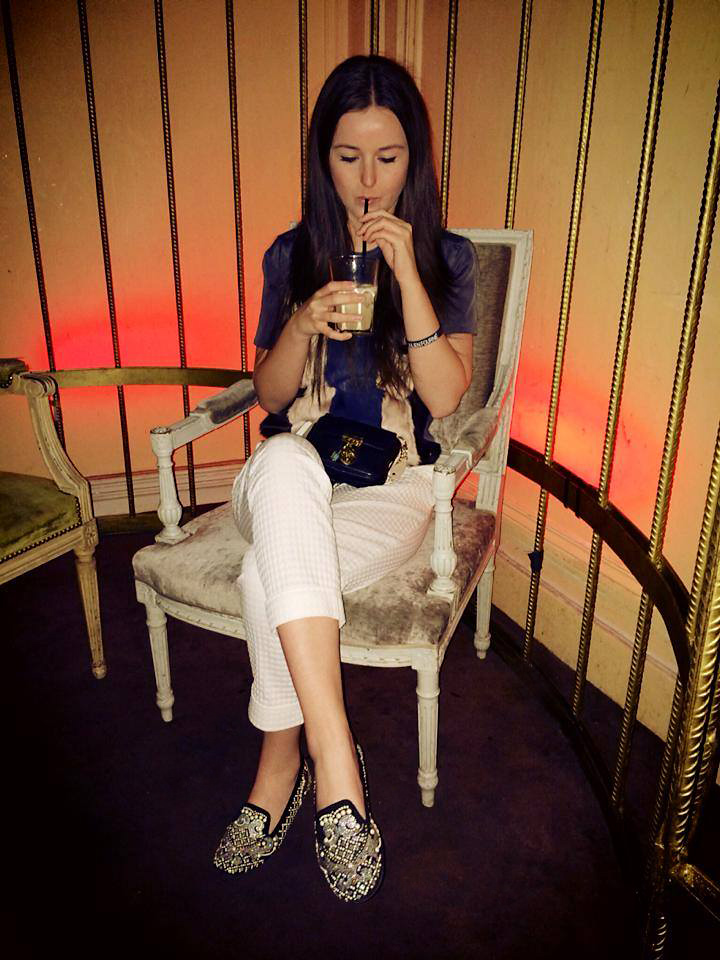 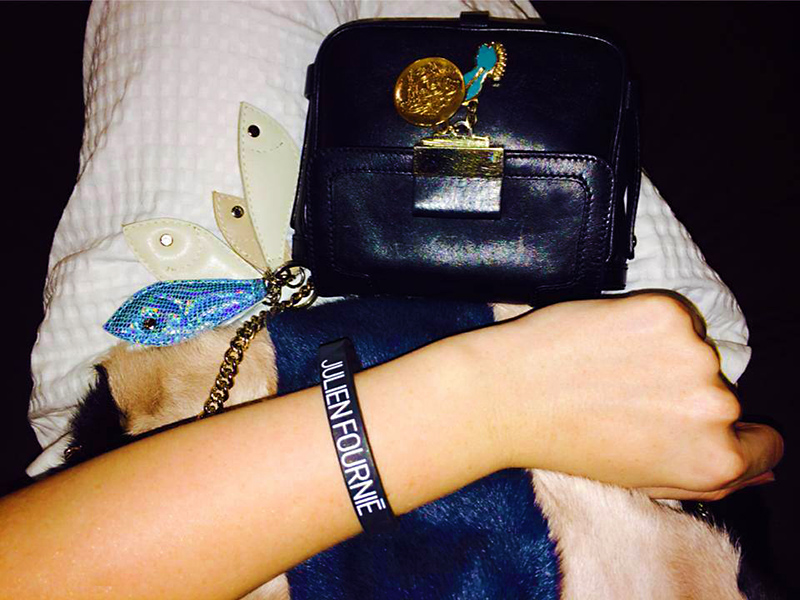 To cut a long story short: as a Hungarian fashion blogger, I’m lucky enough to attend such prestigious and lavish shows. I’m infinitely happy and pleased that my blog fits into this part of the fashion world, too.
Paris is the city of concentrated culture, beauty and style. I think I needn’t write any more. 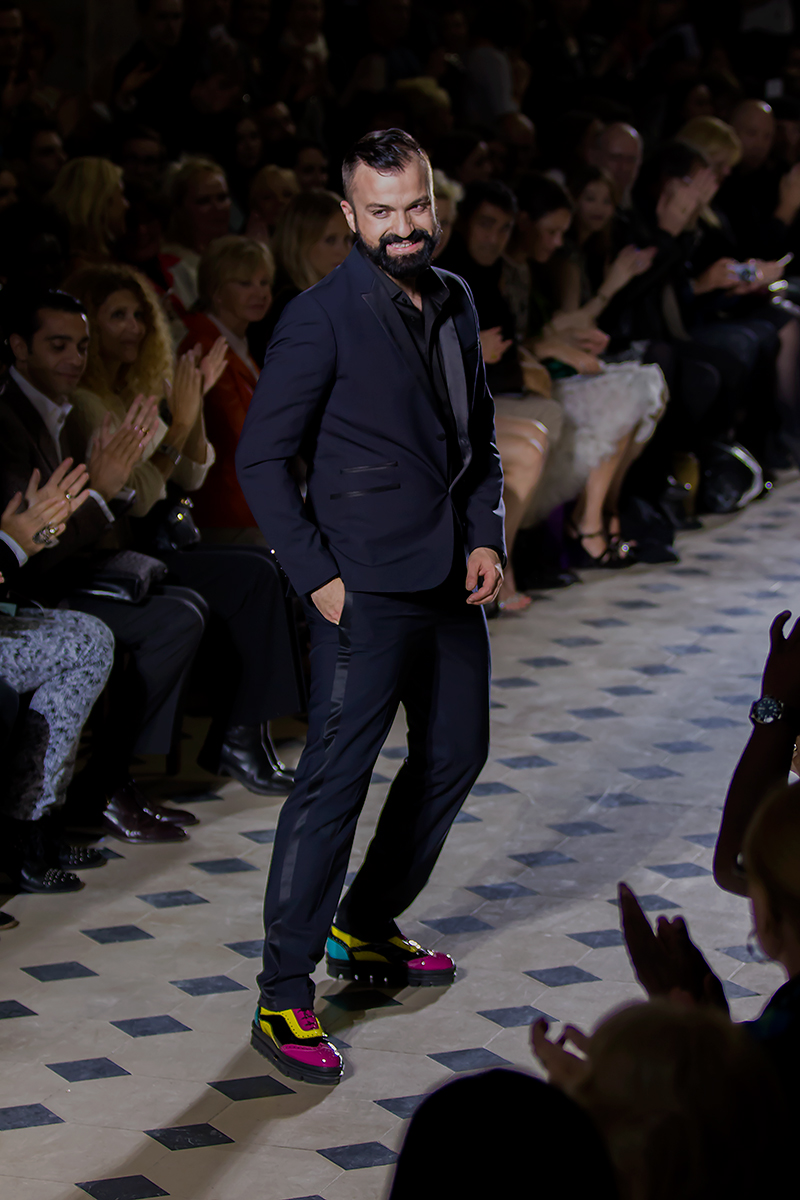 This article is available on InStyle’s website too, here.