Not long ago, I participated in a fashion event organized by Cruciani Hungary.
I’d seen Cruciani bracelets on the internet many times, but never before had the opportunity to admire them in real life.
On Wednesdays, I attend classes at the university all day, so I couldn’t stay at the event for long. I left the second half of one of my classes to rush to the Higgs Field Gallery. Since I didn’t have a camera with me, I only took pictures with my phone.
Since I started my fashion blog,­ I think this was one of the best (if not the best) fashion event I have been to in Hungary. Cruciani Hungary and their PR-group did their absolute best. I really liked the venue, the showcase and the way they presented the products. For me, the most important part was that they were very attentive and helpful all along.
The presentation was held in the aforementioned gallery, where they showed the pieces of the new collection (bracelets, handbags and scarves) to representatives of the written and online press. 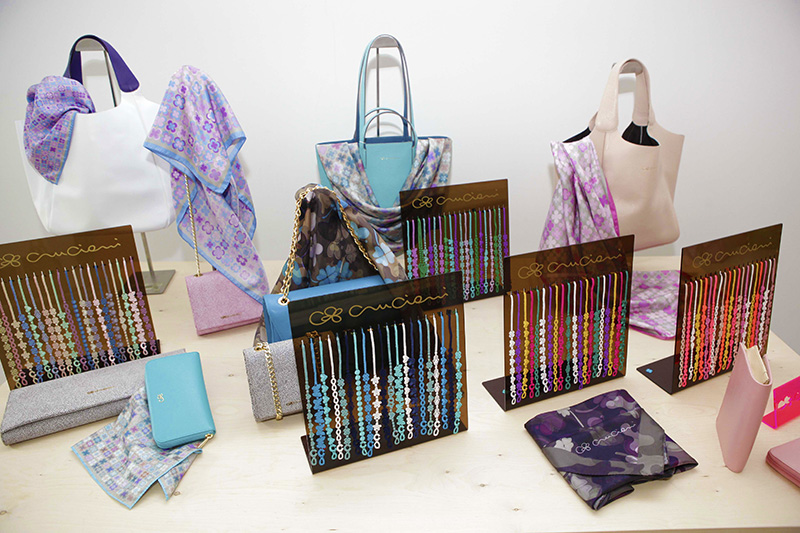 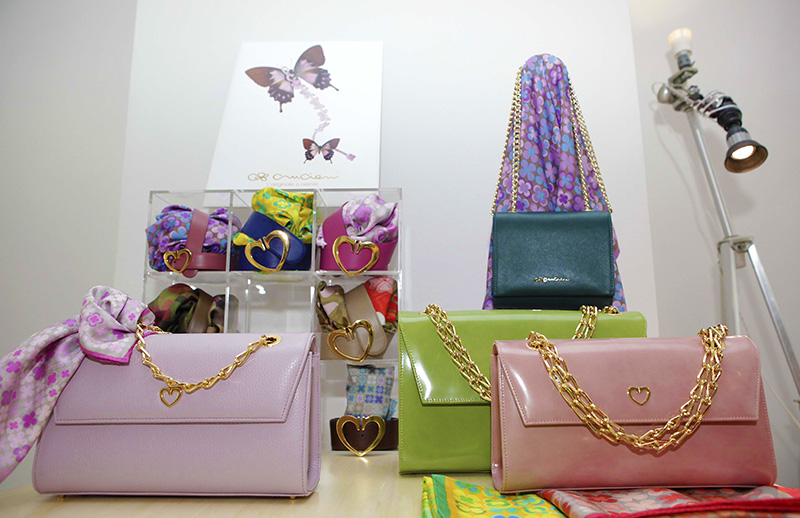 The event started with an introduction, which provided the most important information about the Italian firm. The story of the Italian brand, owned by the Caprai family, started in Milan. The firm, originally dealing with quality outerwear, founded the Cruciani C Luxury Pop trend in 2011. A piece of luxury, a piece of Made in Italy feeling at an affordable price.
The introduction was followed by a short test of four questions about the company, and those answering all four correctly could win a gift. Besides these, we were given a creative task, which I liked best: we had to choose bracelets on the basis of atmosphere-inducing and onomatopoeic words, everybody according to their own taste and imagination. 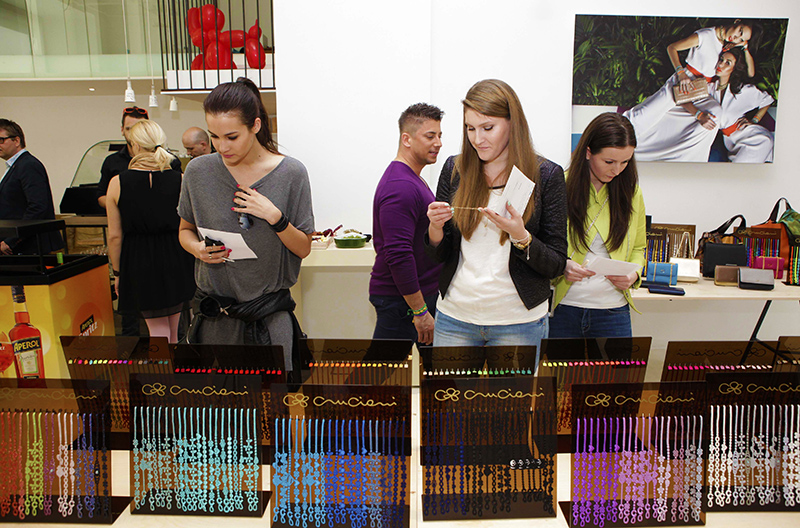 I don’t remember exactly what the expressions were, but they were like loud hoof beats, crunchy leaves, smoky scents, a misty drizzle or rushing blue clouds.
I associated the words with colours, then chose five bracelets I later received as a present. Thank you so much for the beautiful pieces! 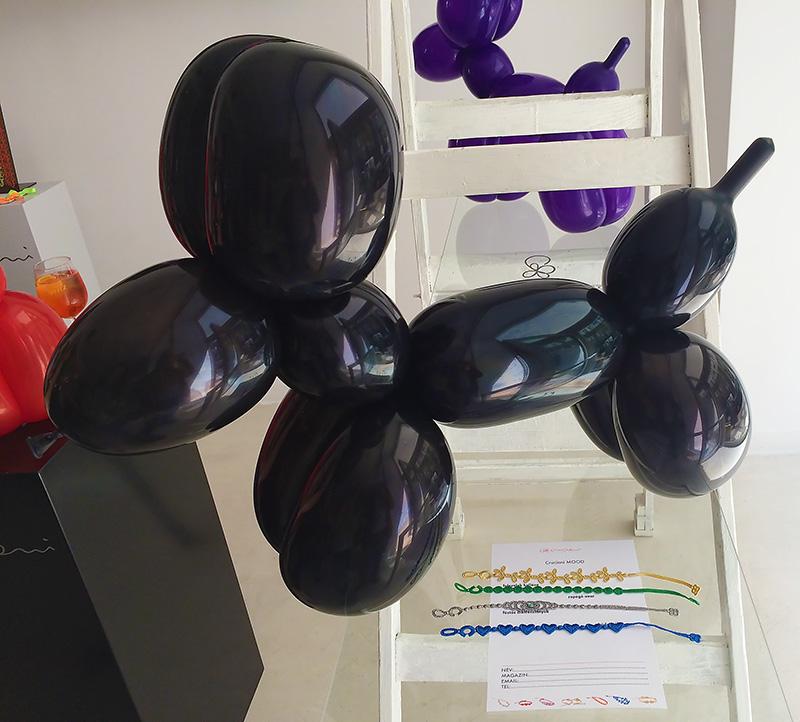 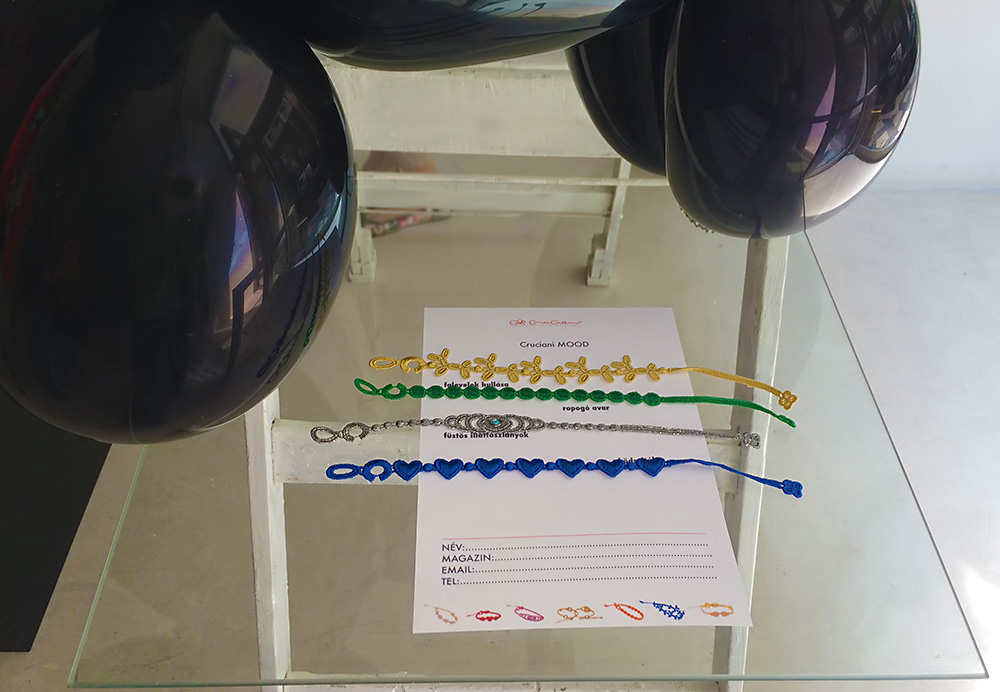 The event’s featured sponsors were the manufacturer of stylish mopeds, Vespa and the company Aperol. The open showcase featured a beautiful white Vespa Primavera and inside, the audience was dazzled by the well-known Hungarian mixer, Peter Morafcsik and his helpers. 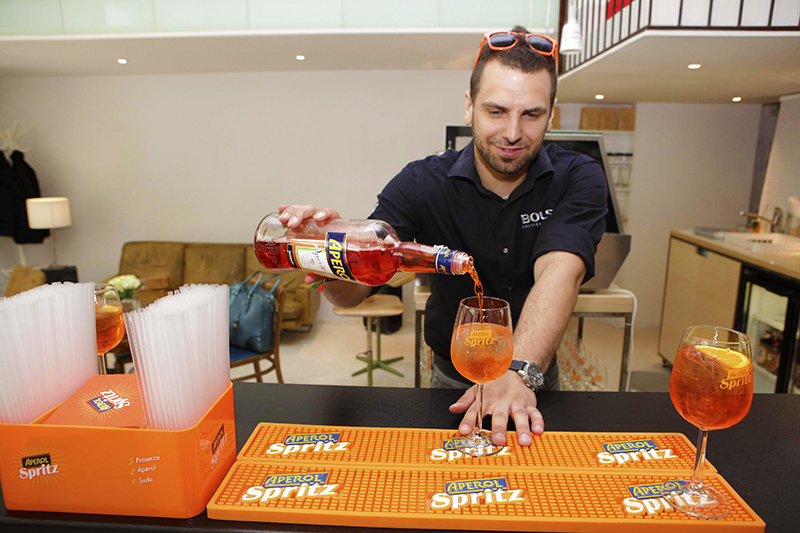 Vespa wanted to give the heritage of the original Primavera a new, more modern form with the purpose of making an agile, easy-to-handle, comfortable moped for use in urban traffic. Not only the exterior, but the engine has also been renewed. It’s more economical, but not at the expense of its sportiness. The engine is quiet and the body swallows all vibration coming from it. Its colour range also signals refined style, youthfulness and unbound freedom. 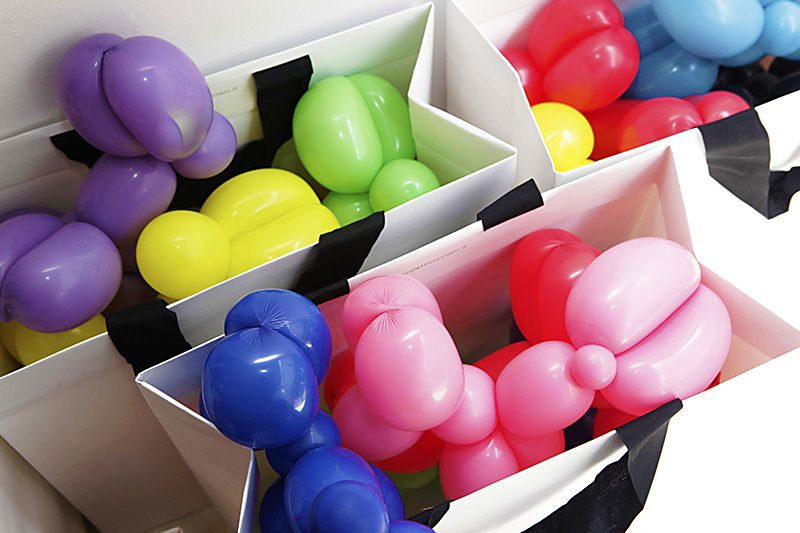 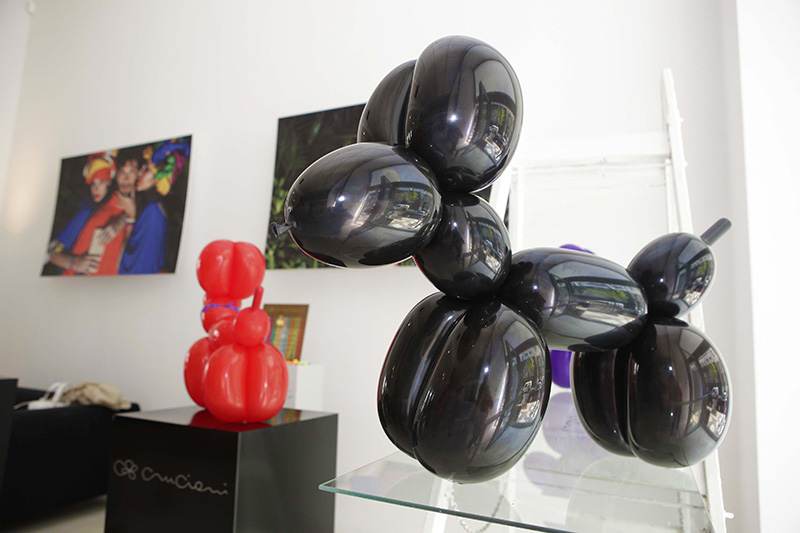 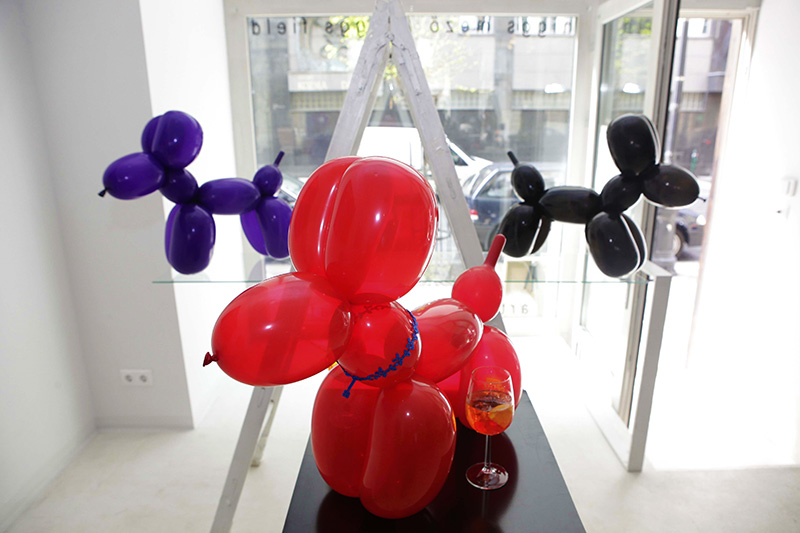 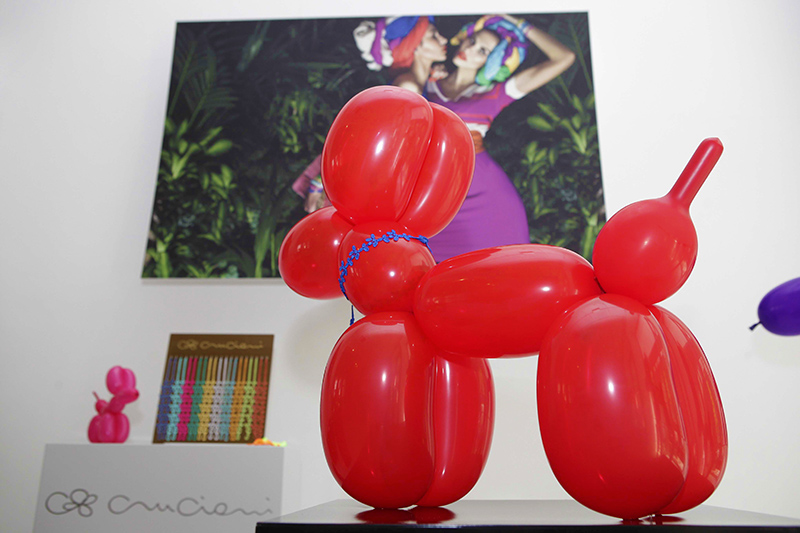 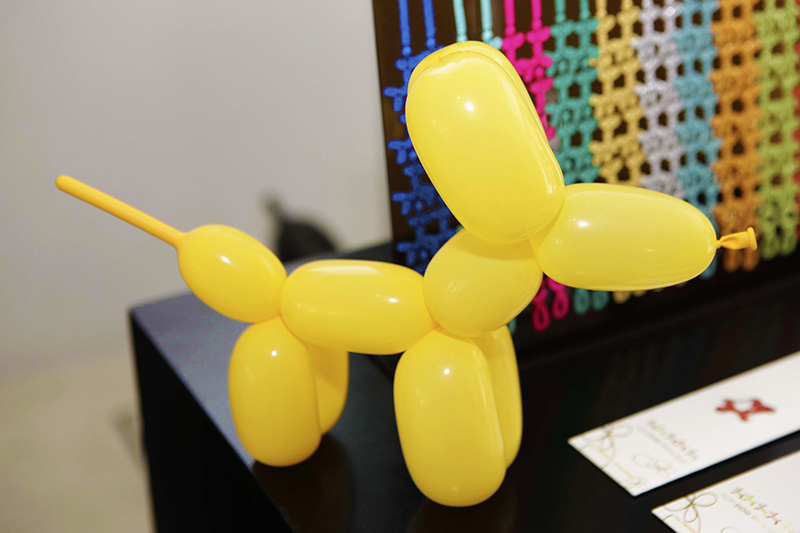 The new POP DOG bracelet was inspired by Koons’ famous “Balloon Dog”, which was sold for over 58 million dollars at a Christie’s auction not long ago – this is the highest price ever paid for the work of a living artist. Cruciani C decided to craft a smaller, bracelet-size copy of the masterpiece inspired by Koons’ child-like imagination at a much more affordable price, targeted at art collectors and animal lovers alike.

The limited edition POP DOG can be purchased in three versions: a golden collar piece, of which there are only 500, only available in various Italian and foreign art galleries. The silver collar piece and the third, classic macramé version without precious metal will only be made to order.

The new collection was introduced by Vittorio Sgarbi on 7th January 2014, in the Pitti Immagine’s Uomo Cruciani pavilion. We were at the Pitti on that day but, sadly, I didn’t see the show.

“Cruciani C’s new bracelet, the POP DOG will be at least as successful as its predecessors”, says the famous art critic. “Fine art is embodied in the miniature version of the gigantic piece born out of Jeff Koons’ child-like imagination – accurately keeping the characteristic shape of the original work of art. This piece is wearable pop art in itself; evoking, along with its street-style atmosphere, the original work born out of the balloon shapes of fun-fair entertainment. Cruciani makes contact with the contemporary art of the world, meanwhile marking the start of a new success story.”

“The idea itself is already a winner. The yellow and pink, gold collar versions of the bracelets made of the simple base material of cotton lace, are ennobled as luxury pop – appearing in a limited edition of only 500 pieces. All this is a tribute to Koons as well as a challenge on a market of incalculable magnitude.”

“The great successes of the previous bracelet collections generate new possibilities for creating ‘fetish’ pieces along with more affordable ‘joy bracelets’.” The art-fashion tradition that started in the Caprais’ lace workshop is continued by Cruciani C’s elegant bracelets, which also shine brightly as pop icons.
Besides the bracelets inspired by Jeff Koons, pieces called La Rosa and Angel’s Heart were also shown.

La Rosa bracelets are Cruciani C’s surprise for mother’s day. The symbols of love, romance, beauty and femininity come to life among the petals of an elegant lace macramé bracelet that appear as a blessing on every mother’s wrist. The invaluable attachment and fragile love we feel for the most important woman in the world is best symbolized by a gift from the heart: a flower.

La Rosa bracelets are available in many colours from the classic red through white, representing purity, and pink to azure and black, targeted at rocker moms. The one with two tones – a combination of red and green – is perfect for mothers with green fingers. The La Rosa collection is purchasable in all Cruciani C boutiques and multi-brand stores, or can be ordered online through their official website. 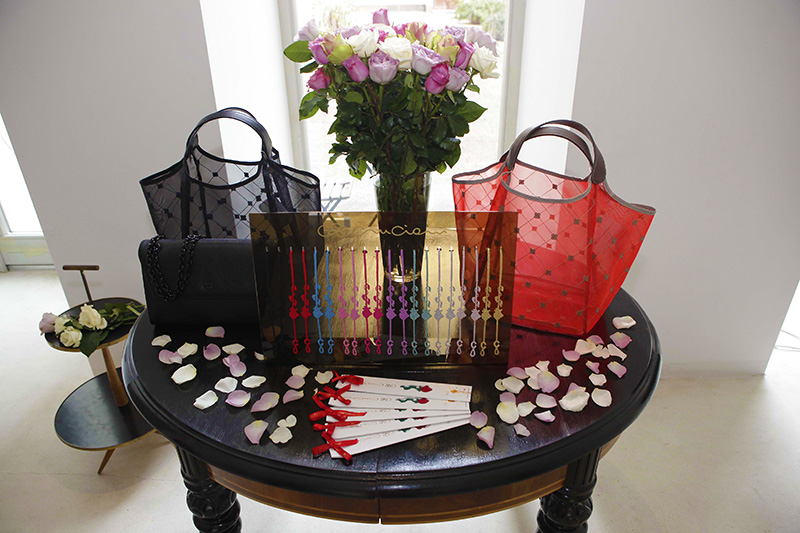 The Angel’s Heart bracelet first became available in Hungary in two versions and ten colours each, called Angel’s Army. It was dedicated by the brand to Angyalműhely, a website and community for women. Thanks to the design idea and its success Hungary, it is now an internationally available collection with a number of new colours added for the summer season. 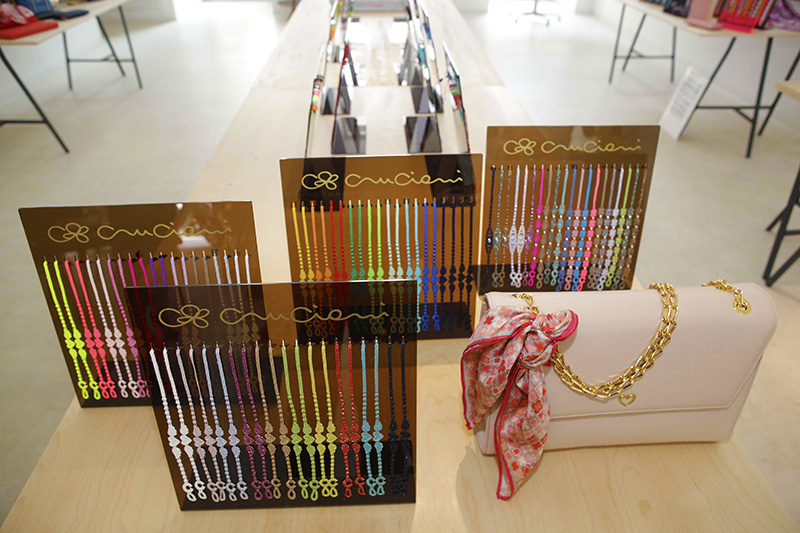 According to the Christian tradition, every human being is protected by a guardian angel throughout their life. The angel is represent on the new Cruciani C bracelet by two embroidered wings, which are joined by a heart, the symbol of love, dreams, freedom, happiness and protection. Fashion enthusiasts are already hunting for this new protection bracelet, which was worn by the famous Italian blogger, Chiara Ferragni, from The Blond Salad at the American Coachella Festival.

You can check out the Hungarian Cruciani’s Facebook page here.
Many thanks to the PR-team for the invitation and the photos!
I will soon start a game in which you can win a Cruciani bracelet.